Hi everyone, I hope you are keeping well.

See the selection below and email me at vox@joart.info

for more details and timetables. 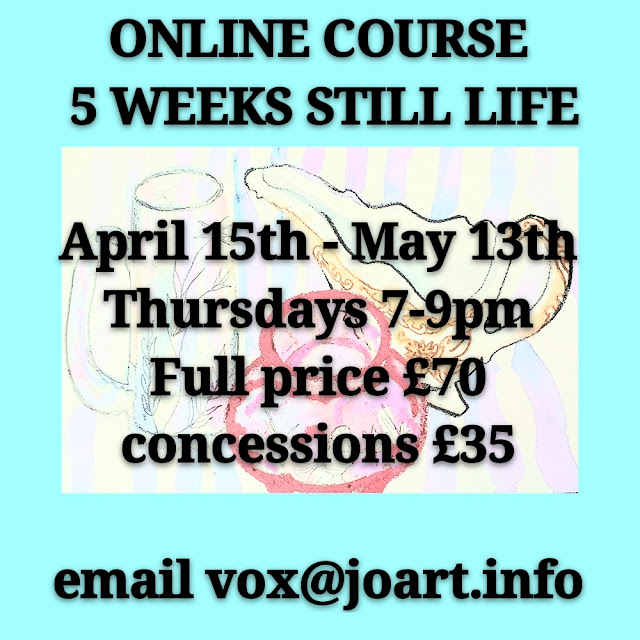 In Watercolour we'll learn all about different colours, how to mix colours, colour bias and simultaneous contrast of colour. We'll paint sea and skyscapes and natural forms. 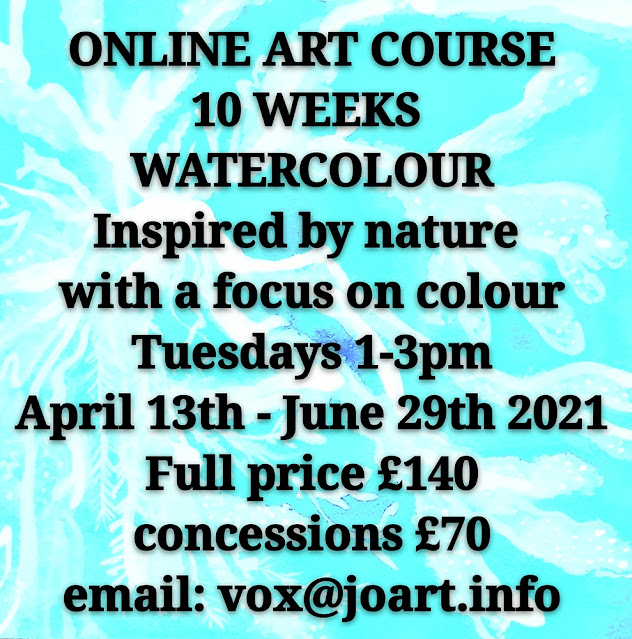 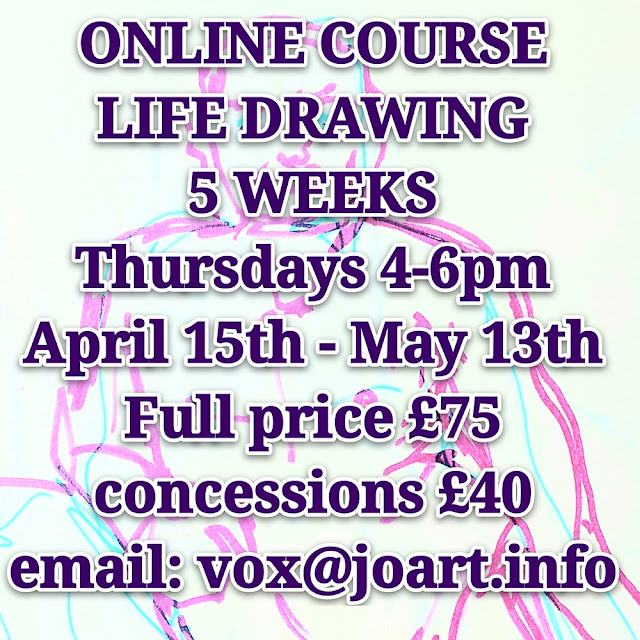 In Portraiture we'll learn about burnishing, reworking a drawing - your eraser is your friend! how to capture a likeness and how to draw hands. 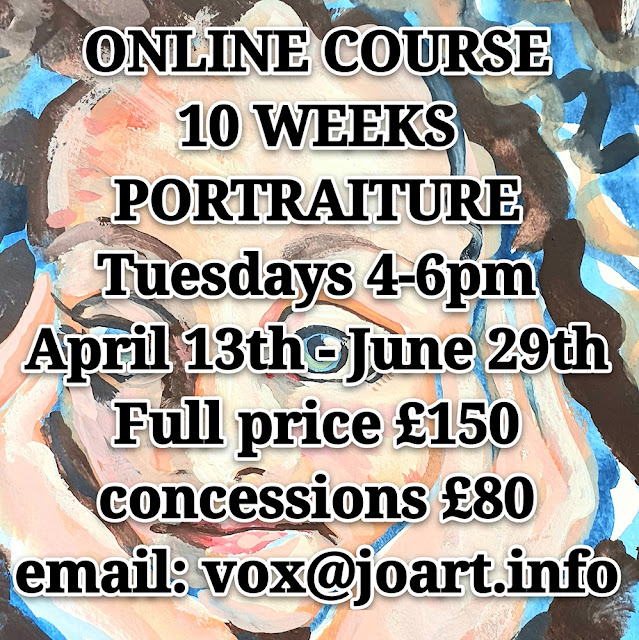 I hope to see you very soon! Best wishes - Jo

Posted by Joanna McCormick at 05:59 No comments:

Hi everyone, I hope you're all doing okay. 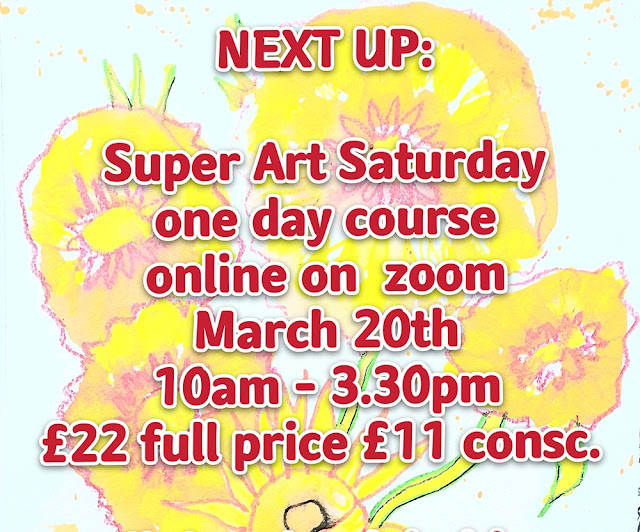 My last fully online Saturday course will happen on March 20th. It's a full day trying out a variety of art techniques in the comfort of your own home, via zoom. We'll do a still life painting using wax resist and watercolour, some drawing exercises - fun ones and observational drawing techniques - and we'll finish with painting in acrylic or gouache, a portrait based on artist Robert Henri.
The one day course is from 10am - 3.30pm and costs £22 full price, £11 concessions. To book a place please follow this link:
https://lewisham.gov.uk/cel/courses/app0048ol---super-art-saturday-online---1-day-workshop---march---74398
My work with Union Chapel continues, with 3 more free art sessions online on Wednesdays 1-2pm. We've been exploring poetry, and bringing poems to life with watercolour and drawing. It's free to join, just drop in! Here's an example from last week: 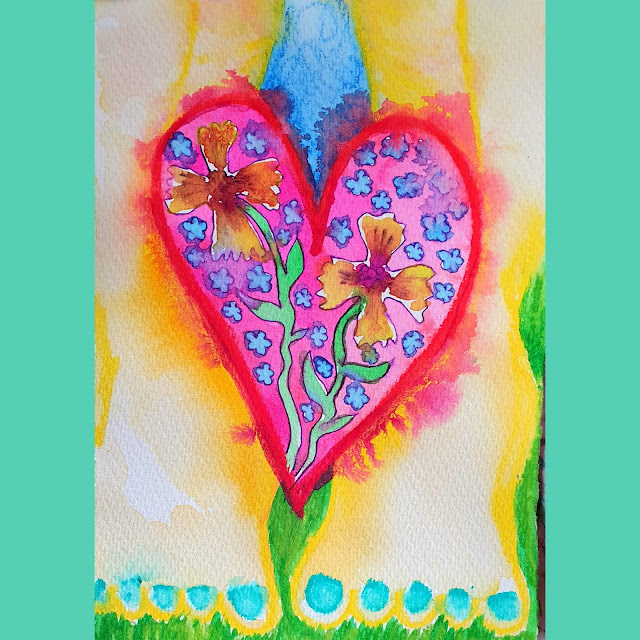 Beyond thought and beyond the mind,
O beautiful One, You abide.
Do fulfil this body, vital, mind and heart of mine.
May I have this sense of fulfilment
In all my achievements,
Taking shelter at Your Feet divine.

Here's the link to join:
Jo McCormick is inviting you to a scheduled Zoom meeting.

I'm really missing my live art and exhibition work, but can't really plan anything like that at the moment. Hopefully by the autumn those will be back on track!
Stay safe, take care and best wishes - Jo
Posted by Joanna McCormick at 05:17 No comments:

I hope you're all doing okay and not finding lockdown 3 too difficult. Big hugs to you all!
Several weeks ago, between lockdowns, I was lucky enough to be involved in running one of my art sessions for Wave, during filming about their work for Songs of Praise.
It's going to be aired tomorrow January 17th 2021, at 1.15pm on BBC1, so do have a watch - I'll be lurking about in the background and you can find out more about the amazing and groundbreaking work that Wave do.
If you miss it tomorrow afternoon you can find it on iplayer by following this link: https://www.bbc.co.uk/programmes/m000rhfy
Huge thanks to Ben and everyone at Wave for their continued support, and the brilliant work that they do. Here's a link to the Wave Cafe website:
https://www.wavecafe.org/
My work with Union Chapel continues, and we're back online in the afternoons.
From Tuesday Jan. 12th, 4-5pm I'll be working with UC's Culture Cafe to offer a series of free weekly drop in sessions, with a focus on colour. They'll comprise of a mixture of discussions focused on colour theory and the meaning of colour, as well as a short practical demonstration on how colour is used in art.
Please email me on vox@joart.info for the zoom link to join. 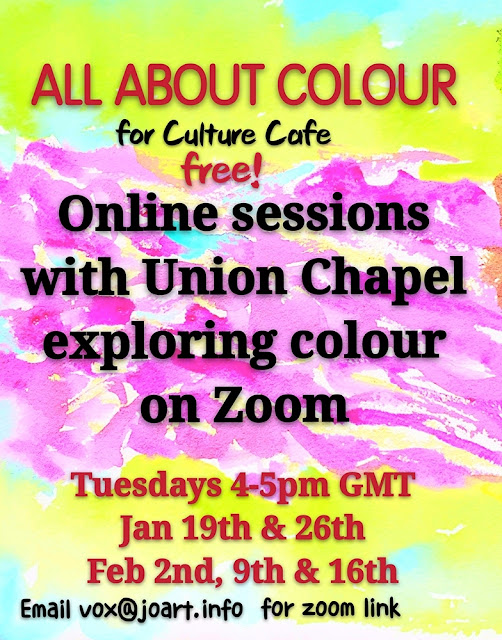 If you fancy spending a whole day learning about different art techniques and having fun making stuff, please join me online for my Super Art Saturday course run through Adult Learning Lewisham.
Due to take place in the classroom at Brockley Rise, this has now moved onto Zoom, and will happen on Saturday January 23rd, from 10am - 3.30pm.
We'll explore watercolour and wax resist, make a portrait using acrylic paint, and do a variety of observational drawing exercises. To find out more and book your place please go here:
https://lewisham.gov.uk/cel/courses/app0047br---super-art-saturday---1-day-workshop---jan---71432
Finally, if you missed the exhibition "Hell and Highwater" that took place in November on LV21, you can still visit it online by going here:
https://lv21.co.uk/whats-on/hell-or-high-water/
Many thanks to Michelle Russell, who wrote this lovely review of the exhibition:
Some Thoughts on Hell or High Water, an exhibition of films set on board the ship LV21 -

The lightship LV21 is now transformed for this fascinating exhibition and provides many echoes from its seafaring history to inspire artists of today.  These are just a few thoughts on a small selection of my personal favourites of the many works shown.I enjoyed Caroline Gregory's 'Welcome aboard', and the camera taking us through the ship - all the different parts of the vessel, the brightly painted hull, the decks, the inside passageways, the portholes, the cabins no longer occupied by the sailors but now given over to artists.  Mystery of a ship no longer at sea - its nautical architecture is inspirational - its previous life was in the water, but no longer, only the outward vestiges remain of what was once needed to survive in its former life.- Sarah Sparkes is the puppeteer seen in the background of her film, pulling the strings of a light blue tiny dinosaur-like being, (from a heraldic image of the Azure Porcupine) - it has a quiff of upright little blue spines.It is delightful to watch the little azure marionette figure dancing and playing round its small space inside the ship, and we enjoy the playfulness, and somehow long forgotten memories of our childhood are evoked - eventually in its wanderings it lights upon a large blue sculptured head, a kind of figurehead - with staring eyes, also with a quiff, though a larger and darker one with taller spines - the little one is playing and dancing again, this time trying to get attention and a response as it touches and moves closer and snuggles up to the head, wanting to play - the blue head is unresponsive - is it just an inanimate object, or is it its mother, strange rejecting mother, or is it just a stranger - and why does it not move in response - could it be - dead? Its continual non-response becomes very poignant.  Eventually the litte azure figure flops down disconsolately and movement gradually stops.  The whole event is mesmerising though it only lasts a few minutes.  It touches the heart.In the next film by Sarah she is seen wearing the large blue head!, transformed into a headdress and in its authentic role as figurehead of the ship - the artist walks along the deck and looks out from the prow - the large blue head is redeemed somehow and stands for adventure as it looks out to sea and the wide blue yonder and its infinite possibilities and we look out with it.- Tracey Francis'  films have a  little girl collecting pebbles and stones - 'it's fun' she says, and we join in too, - but can it be fun for ever? - the stones build up and accumulate, so many stones have been gathered through the years and as she becomes a woman the stones become more heavy and weighty -  'The weight she has to carry' - responsibilities, sorrow, stresses - all carried somehow but not complaining - just carrying the stones - and then as the girl becomes an adult in society she takes part in political action to change the world - and share the load- Joanna McCormick's eerie singing ghost makes strange sounds of lamentation aboard the ship, surrounded by the remembered images, now lovingly handmade into monoprints, of the sailors who were once there in person but where are they now - the shipmates have gone -quiet atmosphere inside of an abandoned ship - but there is still sound to be heard, beautiful tinkling piano music interspersed with the crashing of the waves, the ship has had its being faraway at sea, so far from land - the film drifts from the present to the past, and back again - is she waving or drowning?, did the mariners come safely home or were they lost at sea?These are just my personal highlights,Thank you so much to the curator and all the artists for a wonderful and deeply moving experience
That's all for now. I hope to see you again in person, once this awful pandemic is over!
Posted by Joanna McCormick at 09:36 No comments: